Profit taking on blue-chips drove the indices lower amidst heavy retail activity on LOLC. A parcel of  Environment Resource Investments changed hands yet again today. People's  Leasing & Finance also saw renewed  retail activity with the merger with its subsidiary company around the corner.

Cash Map for today was 54.24% helped by bullish activity on LOLC.  Foreign participation was 37.9% of the market turnover whilst net foreign selling was Rs. 371.0Mn.

Posted by Atchuthan Srirangan at 18:59 No comments: Links to this post

"As long as you enjoy investing, you'll be willing to do the homework and stay in the game. That's why I try to make the show so entertaining, because if you aren't interested, you'll either miss the opportunity to make money in the market or not pay enough attention and end up losing your shirt." - Jim Cramer
Posted by Atchuthan Srirangan at 17:56 No comments: Links to this post

The broader index managed to close in positive ground on Tuesday helped by gains on Ceylon Tobacco Company and John Keells Holdings. Turnover was dominated by premier blue-chip John Keells Holdings and a handful of leading banking & financial sector counters. ASI gained 3.75 points (0.07%) to close at 5,750.24 and the S&P SL20 index lost 0.97 points (0.03%) to close at 3,132.90. Turnover was Rs. 727.7Mn.

Stocks rallied on Wednesday ahead of a meeting by the members of the Monetary Board to decide on the direction of the policy rates. Investors made early celebrations as yields on the treasury bills fell in today’s auction. Foreign investor favorites Chevron Lubricants, Ceylon Tobacco Company and John Keells gained good ground to help the indices close at its highest point so far this year. The resurgence of retail investors was also welcomed as many mid-capped counters gained notably.

On Friday, profit taking on Distilleries and few banking counters whilst at the same time retail interest on mid-capped counters outweighed each other as the broader market index managed scrape onto positive ground. Commercial Bank and Distilleries continued to witness institutional interest whilst a negotiated block trade took place on Hayleys. LOLC saw its shares actively and eagerly traded by the retail segment of investors. We witnessed the market losing steam towards the end of trading whilst trading began on a relatively slow note. ASI gained 0.49 points (0.01%) to close at 5,875.77 and the S&P SL20 index lost 10.25 points (0.32%) to close at 3,174.36. Turnover for today was Rs. 789.7Mn. 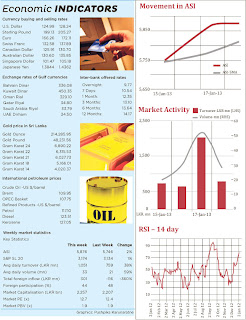 Posted by Atchuthan Srirangan at 17:53 No comments: Links to this post