Gains in large cap counters take market to the green

Sri Lankan stocks which witnessed a bearish momentum during the beginning of the week saw a revival towards mid week with institutional activity helping the indices to edge up to end the week on a positive note. Heavy retail and institutional activity was witnessed as at the end of the week with strategic transactions dominating turnover levels. Furthermore, the week witnessed the release of 1Q2013 earnings of most of the Banks. Majority of the banks witnessed a decline in their profitability largely owing to the slowdown in loan growth amidst the high market rates and the FOREX losses incurred due to the appreciation of the LKR during the quarter.

However, despite the unsatisfactory results of the sector, heavy investor play was witnessed in the banking sector during the week presumably because investors expecting an improvement in sector performance going forward with the market interest rates falling down. Re affirming this Banking, Finance and Insurance sector index witnessed a WoW gain of 0.5% while the sector contributed a circa of 33% to the weekly turnover.

Aitken Spence backed heavy institutional investor play during the week, which assisted the counter to top the list in terms of turnover adding circa 16.5%. John Keells Holdings also emerged among the top turnover list backed primarily by large scale foreign transactions. Counter witnessed a 6.0% WoW gain in its market cap while reaching an all time high of LKR285.00 as at Friday. Due to the high investor play witnessed in the above two counters the diversified index witnessed the highest WoW gain of 3.2% while the sector contributed 35% to the weekly turnover. During the week crossings were also recorded in counters such as Piramal Glass Ceylon, Dialog Axiata, National Development Bank, Commercial Bank and Sampath Bank. On the back of these developments, the week saw an average turnover of LKR1.2bn and an average volume of 42.9mn.

Borrowing costs trend downwards whilst foreign interest retained...
After a hesitant start on account of profit taking, the market continued its upward trend adding 2.1% WoW to its index value. This could be a delayed reaction to the Central bank’s decision to ease policy rates and its monetary policy stance. In response to the policy rate revision, Treasury bill rates in the primary and secondary offers dipped whilst the Central bank kept a tight hold on liquidity to prevent excess borrowings which could spur demand-pull inflation, as inflation currently remains at an elevated level.

Contemporaneously the LKR strengthened against the USD over the week and according to currency dealers, this could be as a result of commercial banks translating dollar holdings to LKR in order to increase the supply of domestic loanable funds. This development along with a drop in Banks’ average weighted prime Lending rate (AWPLR) subsequent to the policy rate revision suggests that demand for loans could be on the rise. This would have implications for the future earnings of banking sector counters, which could witness growth in their loan books (which witnessed a slowdown in 1Q2013) and result in higher earnings.

This would explain the continued interest witnessed in banking sector counters which witnessed a slowdown in 1Q2013 earnings primarily due to currency conversion effects and a slowdown in loan growth. This could in turn have a positive trickle-down effect on the rest of the sectors of the economy as the lower interest rate environment could galvanize firms to invest in expansionary activities which could result in value creation for equity holders. This could partly explain the continued foreign interest in the domestic equity market which recorded a high net foreign inflow of LKR1.6 bn for the week.
Source: Asia Wealth Management Research
Posted by Atchuthan Srirangan at 19:44 No comments: Links to this post

"A man should never be ashamed to own that he is wrong, which is but saying in other words that he is wiser today than he was yesterday." -  Alexander Pope (1688-1744)
Posted by Atchuthan Srirangan at 18:29 No comments: Links to this post 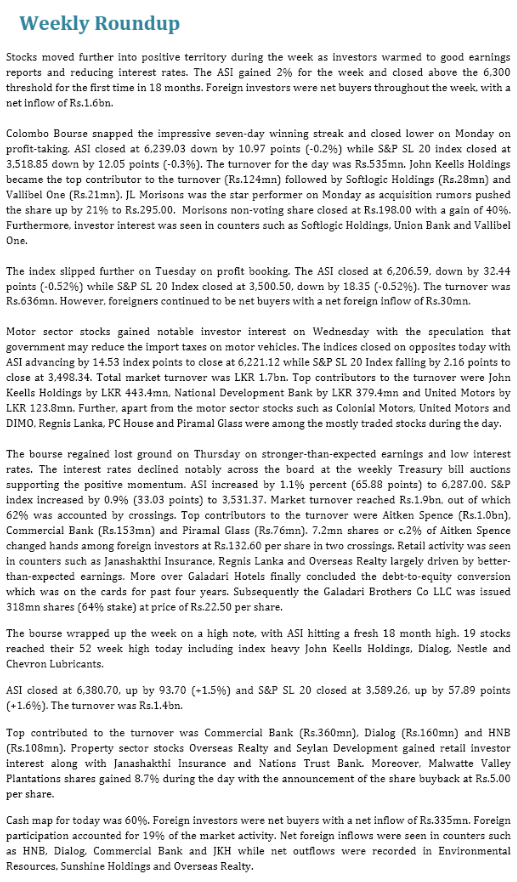 Posted by Atchuthan Srirangan at 18:26 No comments: Links to this post