Sri Lanka rupee down on dollar buying by foreigners

COLOMBO, June 20 (Reuters) - Sri Lanka's rupee fell on Thursday as foreign investors booked forwards to hedge their exposure, currency dealers said, amid a trend of foreign outflows in other Asian peers in the wake of rise in U.S. Treasury yields.

Emerging markets, many of which have been primed by the cheap Fed cash, saw some of the biggest selling as investors rushed to the exits on Thursday, after the U.S. Federal Reserve laid out a timetable for turning off the taps on its $85 billion-a-month bond-buying programme.

'Some foreign investors sold their long-term bonds and shifted to shorter tenure securities to hedge their exposure,' a currency dealer said on condition of anonymity. 'We still see a weaker rupee, with foreign investors selling their bonds.'

The rupee lost 1.6 percent last week. It fell to 129.00/129.10 per dollar in early trades on Friday, its lowest in more than six months, as foreign investors sold debt as part of a broader selloff in emerging markets.

The local currency has weakened 0.7 percent so far this year, following a 10.7 percent depreciation in 2012 as the central bank opted for a flexible exchange rate regime in February 2012.

The bourse ended 0.04 percent, or 2.21 points, firmer at 6,211.44. It hit a near a five-week low on Tuesday on concerns of a possible pullout by foreign funds, following regional peers.

On Wednesday, sources told Reuters that top conglomerate Keells will sign a $640 million deal to establish an integrated hotel complex. Shares in Keells closed 1.7 percent up at 269.50 rupees per share. The market witnessed net foreign outflows of 183 million rupees ($1.42 million) on Thursday, but foreigners have been net buyers of 16.04 billion rupees in shares.

"Trader, before he feeds his family, has to feed his broker´s family." - Alexander Elder
Posted by Atchuthan Srirangan at 18:02 No comments: Links to this post 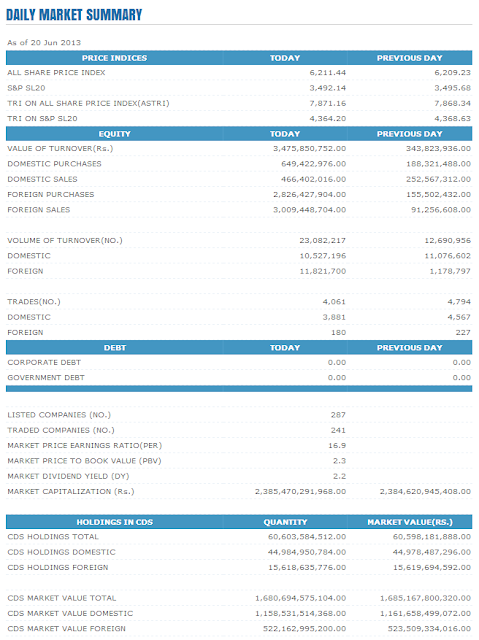 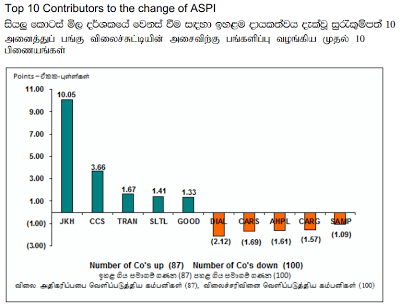 Posted by Atchuthan Srirangan at 17:58 No comments: Links to this post