COLOMBO, June 24 (Reuters) - Sri Lanka's rupee hit a near seven-month low on Monday, before a state-controlled bank intervened to stabilise the currency, dealers said, amid continuous depreciation pressure due to dollar demand from importers and foreign investors who are exiting in the wake of rising U.S. treasury yields.

Two dealers said one of the two state-run banks, through which the central bank usually directs the market, sold dollars to ease depreciation pressure.

'The rupee is going to remain under pressure until the U.S. treasuries settle. Until such time we are going to see a highly volatile rupee,' a currency dealer said on condition of anonymity.

The rupee fell 0.33 percent last week, after losing 1.6 percent in the week previous to that, which currency dealers attributed to foreign investors selling debt as part of a broader selloff in emerging markets.

Foreign investors have been shifting to treasury bills while selling longer tenure T-bonds, the latest central bank data showed on Friday, as a rise in U.S. treasury yields has prompted many offshore investors to rush to the exits.

The local currency has weakened 1.1 percent so far this year, following a 10.7 percent depreciation in 2012 as the central bank opted for a flexible exchange rate regime in February 2012.

The central bank on Monday shrugged off the likelihood of fresh pressure on the rupee, despite the widening of the trade deficit in April.

Sri Lanka's main stock index edged down to a seven-week low with turnover slumping to a six-month low with some retail investors taking profits.

The day's turnover was at 201 million rupees, its lowest since Dec. 24, a fifth of this year's daily average of 1.02 billion rupees.

“The market, like the Lord, helps those who help themselves. But like the Lord, the market does not forgive those who know not what they are doing.” - Warren Buffett
Posted by Atchuthan Srirangan at 19:13 No comments: Links to this post 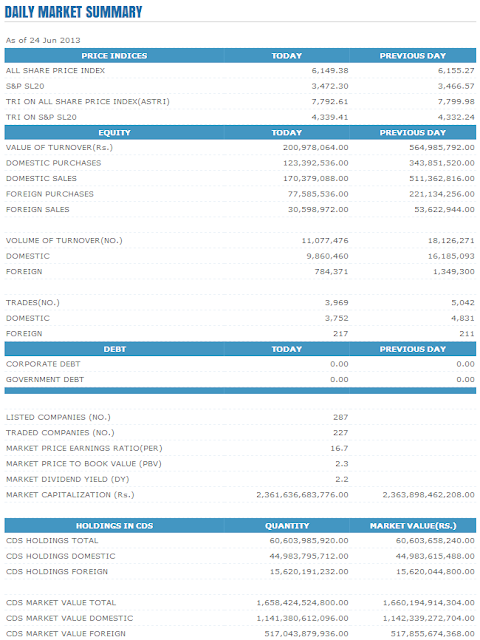 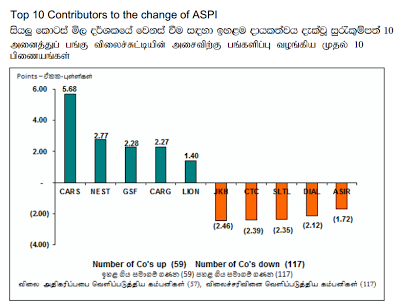 Posted by Atchuthan Srirangan at 19:11 No comments: Links to this post