Ten Types of Trading Animals:Which Are You?

The Bear - This trading animal believes the market will be going down and plays the short side. Bears think that a market is going to be very red.

The Bull - This trading animal is very optimistic that the market will be green. Bulls love to buy and believe their screen will be full of green.

The Whale - This trading animal can move prices when it buys and sells. The whale has to faze into positions and out of them so it does not make big enough waves to attract piggy backers. A lot of money can be made trading along side the right whale.

The Pig - This trading animal likes to trade big and often. The problem is that the pig does not know how to exit a winning trade he usually has too big of a target, too big of a position size, and too big of a time frame.

The Shark - This trading animal is just about making money, it gets into trades, makes money and gets out. It has little interest in big complicated theories or esoteric methods. The shark keeps it simple it makes money then moves on to the next opportunity.

The Chicken - This trading animal has trouble trading with much size, or even taking good entries, the chicken is too worried about losing money. Fear keeps the chicken from trading.

The Sheep - This trading animal usually is part of a flock. The sheep likes to be on the side of the majority and follow a guru. The sheep hates to think but loves to follow. The sheep is usually the last one into an uptrend and the last one out of a downtrend. They do not want to develop a trading method of their own they want to piggyback someone elses.

The Wolf - The wolf loves to trade on the opposite side of the sheep. This animal loves to trade at the market turning points. Selling short an overextended market or buying when there is “blood on the streets.” The wolf loves to sell out-of-the-money options with terrible odds to gamblers. The wolf is always trying to get on the opposite side of the suckers, the gamblers, and the sheep.

The Turtle - The turtle is slow to buy, slow to sell, and trades on the long term time frame. This trading animal looks to be on the right side of the big trend and try to trade the least amount possible to make as much as possible. Turtles don't really care about the live action and are more concerned about the end of day result and the weekly chart primarily.
http://newtraderu.com/
Posted by Atchuthan Srirangan at 11:22 No comments: Links to this post

Touchwood Investment PLC at a glance

Touchwood Investment PLC was established in 1999 and listed at CSE in 2002. 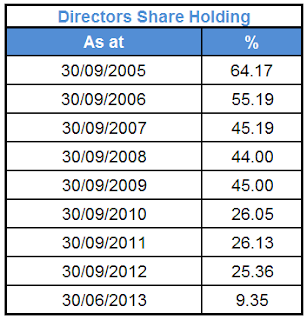 If not he has 2400 shares in his Portfolio by now.

Interestingly it seems that the directors disposed their shares before the right issue.

Posted by Atchuthan Srirangan at 11:22 No comments: Links to this post